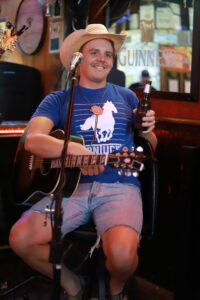 “I appreciate honesty in all aspects of life, but music in particular”, says Kalyn Beasley as he sits at his kitchen table drinking coffee. “I want to hear what someone sounds like, just exactly what they sound like when they are singing and playing guitar”. Kalyn is reflecting on his 2019 album Frontier News, a project he wrote, produced and recorded himself. “I got tired of waiting around for something to happen, so I acquired a bunch of recording equipment, set it up in my basement and got to work”.

Since his previous release, Northerner, in 2016, Kalyn has been collecting life experience and turning them in to songs while playing several hundred shows almost entirely solo acoustic. “I don’t know, I’ve been in a band and it’s like a marriage without the fun part. Playing solo acoustic is challenging, but it forced me to write more interesting songs, tell stories and become a better musician. Besides, the logistics are simpler”. When he decided it was time to furnish a new set of songs, Kalyn chose to deliver the songs exactly as they would hear them in person. Just him and a guitar. “Mainly it was out of necessity, I didn’t have a budget, and I wasn’t gonna ask anyone for money, but I had these songs I loved and felt like people needed to hear how far I’d come. I’ll be the first to admit there’s mistakes, but that’s the whole point. I’m tired of perfection in music. And I wanted to make something I’d want to hear. Warts and all.” Some of Kalyn’s favorite records are rough, unpolished and live. He wants to hear the humanity come through the speakers. In an age where computers can make anyone sound like they know how to sing, Kalyn thinks the chops you earn should be on full display, even if there’s errors. “So that’s what this is. Frontier News isn’t exactly a one take album because I screwed up so many times that if I didn’t hit the last chord right the whole take was useless. The track you hear might be take 35 but that’s because it took 34 wrong takes to finally play the damn song correctly start to finish. No overdubs. No punch-ins. It’s the best that I could do at that particular time singing and playing my guitar at the same time.” This labor intense process also helped him weed out songs he ultimately couldn’t stand to play forever. “I mean, if you can listen to a song you wrote 40 times by yourself in your basement through good speakers and still not hate it, that’s usually a good sign.” The title of the album had been thought out long before most of the songs were written and reflects the area of Northwest Wyoming where Kalyn calls home. It’s a place where little makes national news besides the annual Yellowstone tourist being trampled by a buffalo. “They say the Bighorn Basin, where I live, was the last place to be properly settled in the lower 48. The last Frontier, if you will. It’s so harsh and dry and windy here that it’s not really that difficult to believe. Come out in January, you’ll see.” Like his previous release, Northerner, in 2016, the songs on Frontier News share a common theme of rural western living in the 21st century. Kalyn feels that country music on the radio isn’t representative of country living, especially in Wyoming. “You don’t get more rural than Wyoming, if that’s what you mean by ‘country’. There are stretches here where you don’t pass a town for hours.” Kalyn’s songs are about a specific place and time and he admits these songs aren’t for everyone because they are about a small portion of the population living in a giant swath of the West. “There’s a movement of young western people writing honestly about this wild place out here and I’m excited to be part of it. Some of them are friends and we talk about how cool it is to meet other young writers basically covering their corner of the west. There’s just not a lot of us.”