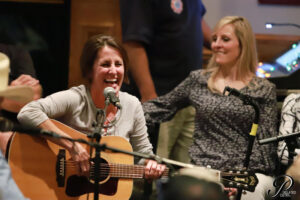 Helen Darling is best known for her crossover #1 hit song “Bring On The Rain” recorded by Jo Dee Messina and Tim McGraw. This song was subsequently nominated for a Grammy, an ACM and a CMA award. In October 2002, Darling was honored by NSAI members with a superior creativity award and by BMI with a citation of achievement award for “Bring On The Rain”.

Darling started her career as a Chicago jingle singer on television and radio commercials for such clients as McDonald’s and 7-up. Her voice sang the familiar query, Have you driven a Ford lately? After moving to Nashville in 1993, Darling began singing song demos as well as back-up for artists such as Garth Brooks. Next Darling signed a country music recording contract with MCA/Decca Records. On her debut album, she invited Brooks to sing back-up on her track of “Even God Must Get The Blues”. Delbert McClinton and Lee Roy Parnell also made cameo appearances on this freshman effort.

In 1998 Darling moved back to Austin, Texas to pursue family and songwriting. Reba McEntire recorded Darling’s “The Angels Sang” on her 1999 Christmas album. Extreme Writers Group signed Darling in 1999 as a staff writer, and she has since had cuts with Mindy McCready, Niki Horner who is a new act on Lyric Street Records, Bering Strait, a Russian band soon to be released on Universal South Records and Amanda Wilkinson currently being released on Universal South Records. She currently divides her time between Montana and Texas with her husband Dennis and two sons Cameron (13 years) and Carson (12 years).