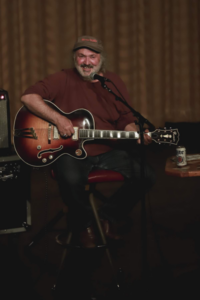 Kostas has written for an array country music artists, including Dwight Yoakam, Chris LeDoux, The Mavericks, McBride & the Ride, Patty Loveless, and Travis Tritt. He has won eleven awards from Broadcast Music Incorporated (BMI). Kostas’s first cut as a songwriter, “Timber, I’m Falling in Love”, was recorded by Loveless; released as a single in 1989, it went to Number One on the Billboard country charts, becoming Loveless’s first Number One hit. She would also release three more of his songs as singles: “The Lonely Side of Love” (1989), “On Down the Line” (1990), and “Blame It On Your Heart” (1994). “Dwight Yoakam also recorded several songs written by Kostas, including “Nothing’s Changed Here”, “Turn It On, Turn It Up, Turn Me Loose”, and “Send a Message to My Heart” (a duet with Loveless). Kostas also wrote singles for McBride & the Ride, Travis Tritt, Holly Dunn, Martina McBride, and The Mavericks.  He is a past recepient of the CMA Songwriter of the Year and was inducted into the Nashville Songwriter Hall of Fame in 2019.