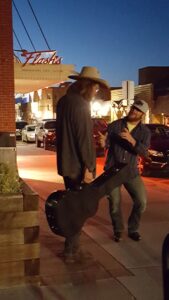 Montana musician Sean Devine brings together the rugged landscape of the West, a wealth of original songs, and a lifetime of personal experience in Here for It All, his first album in six years. Produced by Josh Thompson (Cody Jinks), the eloquent project provides a firsthand account of second chances, showing up, and seeing it through.

“Here for It All means being here for the inevitable heartbreaks and the sorrow that will come with life, no matter what,” he says. “You’re not going to avoid it – and you’re not going to hide from it. You have to be in this with your whole heart, right? It’s that feeling of staying open and taking the risks that really matter.”

The title track quickly sets the tone by reflecting the joy he’s found in remarriage after a rough patch. So begins a revealing song cycle that finds Devine finally embracing the opportunity for a fresh start (“Crazy Too”), and viewing the world differently as a result of it (“I’m Free”). Through his lyrics, he guides a listener through troubled times – some autobiographical and others fictional – without losing sight of the glimmer of hope in the distance. That persistence pays off in the album’s uplifting finale, “Can I Get a Witness.”

Although Devine sequenced the nine songs on Here for It All himself, its cohesive narrative may be partially credited to Thompson, who mined a folder of 26 unrecorded (and sometimes completely forgotten) compositions to make the record. “I’d never hired a producer before and I didn’t want to get it wrong,” Devine admits. “I figured maybe my best approach would be to turn it all over to him.”

Devine first met Thompson at a concert hall in Missoula through a mutual friend, singer-songwriter Ward Davis, who was touring with Jinks at the time. Davis introduced Devine as “the Bob Dylan of Montana,” an off-the-cuff comment that nonetheless compelled Thompson to request some demos. Not long after, when Thompson offered to produce a studio album using Jinks’ band, Devine agreed on the spot. That spontaneity and collaborative spirit resulted in songs that would feel equally at home in a listening room or a country bar’s jukebox.

“They didn’t try to force anything. They didn’t try to turn it into some new thing,” Devine recalls of working with Jinks’ band, known as the Tone Deaf Hippies. “They came to where the song started, with me and my acoustic guitar. They brought out what was sweet about it – and they’ve got hooks. That was part of the fun of working with them in the studio. Their instincts as musicians were to find the hooks, and if it didn’t have one, they’d make one.”

However, Devine’s ability as an acoustic guitarist and storyteller is not to be underestimated. On “Clay Bluffs,” he builds a gripping story around an overheard conversation at a gas station in Wyoming. Later, “The Palomino Mustang” cinematically tells the tale about failing to catch something so elusive, while “Texas and Tennessee” serves as a country music history lesson — and a thoroughly enjoyable one at that.

A fifth-generation Montanan, Devine was born in Bozeman where his father was a linebacker for Montana State University. However, with two young children, his dad dropped out of school and found work as a carpenter. The young family lived for a time in construction work camps in northern California and in the southern Idaho mountains, before returning to Montana and settling in Livingston.

As a boy, Devine tagged along with his father and great-uncle to fiddle competitions, slinging his Sears guitar over his shoulder with baling twine. Meanwhile, at home, he absorbed the storylines from his mother’s favorite artist, Kris Kristofferson. By early grade school, Devine was writing his own songs. He composed his first one at 8 years old about his parents’ divorce – and realized the force of songwriting after playing it for his parents. “There’s never been a point of my life, since I was a kid, where at least part of my mind wasn’t preoccupied by music,” he says.

By his teens, Devine had played in a bar band with his dad and uncle as well as a rock band with his high school friends. In the ‘90s, he crashed for a while at his brother’s apartment in New York City to try the folk club circuit. Although Devine worked his way up to a gig at the Bitter End, his wife at the time gave him the ultimatum of choosing between Montana and Manhattan. He returned to the West, settling in among a number of established authors, songwriters, actors, and painters who had relocated there.

Soon becoming a regular in the Rocky Mountain clubs, he sold copies of his first album Walking Down the Road from the backseat of his Buick. After the Big Parade followed in 2004. Looking back, he says, “I always made enough money to keep going but never enough money to stop.”

The constant travel took its toll on Devine’s first marriage. In an effort to stay closer to home, he did his own stint in construction, until The Great Recession nearly wiped out his business and helped to end his second marriage. Going back to basics with his guitar and his songs as a single dad, Devine was reluctant to trust in love when he met the woman who would become his third wife. She encouraged him to make the 2015 album Austin Blues, and they married in 2017. Now 51, Here For It All is Devine’s fourth and most fully realized album.

“Everyone gets knocked down and beat up by life sometimes, and you have to get back up and go on.  This album is about finding a way forward and bringing your past with you. You don’t really start over. You start again with everything you have in you and build your life out of that. You’re likely to do better because you are better. And, hey, good luck!”