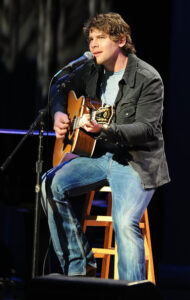 Randy is a songwriter’s son who has found his own voice and quickly earned respect as a tunesmith on Music Row. He co-wrote nine songs on his eponymous album, and Montgomery Gentry recorded the Randy-penned “Can’t Feel the Pain.” Emmylou Harris was so impressed by Randy’s talent that she harmonizes with him on “Last Horse.”

His father is Billy Montana, whose hits include Garth Brooks’ “More Than a Memory,” Sara Evans’ “Suds in the Bucket” and the Grammy-nominated Jo Dee Messina hit “Bring on the Rain.” “Growing up around it, it took me awhile to come into my own,” he says. “I never worried about being in a shadow or anything like that. But I also wanted to achieve that same kind of songwriting level that my dad achieved.”

Randy was born in Albany, N.Y., and moved with his family to Nashville in 1988 when Billy signed a record deal with Warner Bros. He started playing guitar at age 10, writing songs at age 16 and performed his first song publicly at one of his father’s writers’ nights at age 17. “I always grew up around music, watching him do it,” says Randy, who listened to Bruce Springsteen, Tom Petty and Jackson Browne on family road trips. “Anytime the family got together, the guitars came out.”

He was an award-winning high school quarterback. But he declined several football scholarships and instead opted to play college soccer at Nashville’s Trevecca Nazarene University before transferring to Middle Tennessee State University for two years, until music beckoned. During college he played in a band called Homestead that was frequently booked at fraternity parties and Middle Tennessee bars. “That was a great way to just get your chops up and understand how a crowd works and how to keep them entertained,” he says.

Randy worked odd jobs, including roofing houses, waiting tables and bartending, while writing songs in hopes of landing a publishing deal. Inspired by the music of Steve Earle, Chris Knight, Hank Williams, Jr., Waylon Jennings, Willie Nelson, The Wallflowers and Counting Crows, he eventually came into his own with a sound that’s a little left of country’s center.

Randy has opened for artists including Lady Antebellum, Grand Ole Oprymember Little Big Town, Taylor Swift and Sugarland. “It was quite a learning experience, being a part of something where they put 12,000 – 14,000 people in seats a night,” he says of touring with Sugarland’s Jennifer Nettles and Kristian Bush. “Kristian said one of the coolest things at the end of the tour. He said, ‘Thanks for keeping the musical integrity of this tour.’ That meant a lot coming from a guy like that.”

Randy’s goal is to have enough success that he can keep doing this. “I just love this,” he says. “I wouldn’t have it any other way – performing live, songwriting, being in the studio. I truly love it all.”

“Like they always say, ‘Find something you love to do and you’ll never work a day in your life.’ So far, I feel that way. There’s nothing I would rather do. I want to take it as far as it can go.”