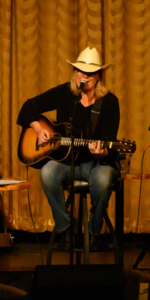 Karen Staley was born in Weirton, WV and was raised in nearby rural Hookstown, PA in the Tri-State area of WV/PA & OH. She is a 30 year veteran of the Nashville music industry & has been involved in virtually every facet of the business from songwriting & performing to touring, recording & producing.

Karen’s #1 songs have been played on radio over 12 million times & counting. Those songs have collectively sold more than 20 million albums, singles, and downloads.

Karen is one of the original mainstays at the Bluebird Café, the now iconic listening room popularized by the ABC TV show Nashville. She is also one of the pioneers of the “In The Round” format for shows.

Her songs have not only been recorded by modern stars like Faith Hill, Reba,Trick Pony, Terri Clark & Tracy Byrd but also by icons & legends such as George Jones, Dolly Parton, Tammy Wynette, Conway Twitty & Brenda Lee

Karen’s songs have been nominated for Dove, Grammy, & International Bluegrass Awards & Karen won the ACM Song of The Year award with Tracy Byrd’s classic Keeper of the Stars which was also featured on CMT’s 100 Greatest Country Love Songs of All Time TV special.