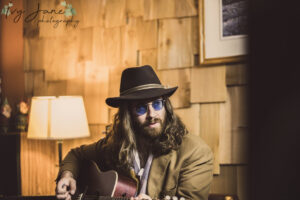 John Hewitt was born the day Tom Petty’s “Wildflowers” was left within his grasp. Learning the best of songwriting from his musical heroes ranging from Dylan, Petty, The Doors, the Grateful Dead and others he has maintained a prolific repertoire through the years. Born in Northern Ontario, spending a few years in Toronto before making Edmonton, Alberta his home. Since arriving in the capitol of the Wild Rose Province he began performing with local bands, filling in at jams and building his band as an outlet for his original music. The New Americans released their debut album just in time for a worldwide pandemic to come by and stop the group dead in their tracks, however this did not stop John or the band from creating more content. While working full time he began producing his own music. Now with the New Americans on hiatus John Hewitt has become a solo force of his own. With the release of “American Hotel” in March 2020, “Hollywood Reality” in July 2020, “Dead lovers” in 2021 and a number of singles under his belt, the songwriting will not stop and the material won’t stop coming. Keep an eye on the Alberta Festival scene where you’ll find him for the first time since the pandemic his, showcasing his songs to the world.

Listen to John on Spotify