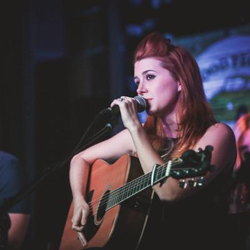 Three songs. That is all it took for Atlantic Records chairman and CEO, Craig Kallman, to sign Jesse Lee at the ripe age of 20. Kallman credits the gifted Lee for inspiring him to take a plunge back into country in a major way. “She reminds me of a modern-day Patsy Cline, with an amazing voice, a magnetic personality and, of course, a tremendous gift for songwriting.”
It seems that Kallman was onto something. Her time at Atlantic Records allowed Jesse to develop her raw talent, molding her into the gifted writer she is today. She has since perfected the ability to put her personal life experiences onto paper, crafting them into lyrics that are relatable to an entire audience. “Writing has and always will be, my first love,” she says. “My ideas and lyrics are inspired by everyday life. Heartbreak, second-hand stories, love, tragedy. There’s a song in everything.”
With a fierce determination to see her dreams and aspirations come to life, Jesse is now enjoying the success she has worked so hard for. In 2016, Jesse co-wrote Kelsea Ballerini’s #1 hit, “Peter Pan”, Keith Urban recorded her song “That Could Still Be Us” on his platinum selling album Ripcord, and her song “Feels Like Christmas” was recorded by the acapella group, Straight No Chaser for their ‘I’ll Have Another…Christmas Album.’ In 2017, Jesse was awarded “Breakthrough Songwriter of the Year” by Music Row. This same year, at the annual NSAI Awards, “Peter Pan” was voted as one of the ’10 Songs I Wish I’d Written’ by her fellow songwriter peers. As if this year couldn’t get any better, Jesse saw her song “Like I Loved You”, co-written with and sung by Brett Young, soar up the charts to the #1 spot for 3 weeks. This became Jesse’s second, back-to-back #1.
On the artist side, Jesse has worked with Grammy Award winning producers Mark Bright (Carrie Underwood, Rascal Flatts), Nathan Chapman (Taylor Swift), and Paul Worley (Dixie Chicks, Martina McBride, Lady Antebellum).
“I love to wake up every morning and write. Hearing my songs on the radio is pretty cool, but the day that I write a song and fall in love with it for the first time – well, nothing beats that.”