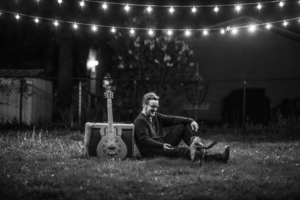 Graham Bramblett was born in raised in Dallas, Texas before embarking on a journey where he called many places home. Bramblett attended college in Missouri but found himself paying as much attention to writing and performing songs as much as his school. Upon graduation, he moved to Nashville to chase that songwriting dream and spent a number of years on Music Row homing his craft. However, in 2010 he left Tennessee for the Twin Cities after burning out. “I ended up in St. Paul because I had family there and it seemed like a good place to reboot. Music had become a chore and I was out of tune with Nashville. Mostly, I had forgotten why I started writing songs in the first place.” After a few years, the fire reignited and Bramblett found himself writing and performing around the cities frequently. His debut album, “Under The Lights”, was released in August of 2016 and was well received locally and included radio play from a number of radio stations in the area.

In the Spring of 2018, he released “Standard Harmony” to a sold out crowd at The Icehouse and had the single, ‘Want To, selected as ‘The Song Of The Day’ by 89.3/ The Current. “‘The Song Of The Day’ meant a lot because The Current is an independent format station and that song is country. That made me think a lot about where I was at that time and if it might make more sense to be back in Tennessee”, In the Fall of 2018, Graham made the move back to Nashville which happened to coincide with Americana Fest. “I unpacked the U-Haul and then met up with 8 of my buddies from Minnesota that night. I got lucky, very lucky that the timing worked out.” Graham is continuing to write and book performances locally and nationally.

“I really enjoy recording and playing live shows, but at the end of the day, it all goes back to the song. That’s what really drives me- the process that begins with nothing and turns into something.”