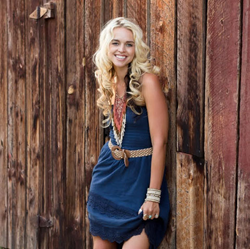 The musical stylings of Idaho based songwriter, Brook Faulk, are as varied in range as the timbre of her voice. Sometimes the maverick outlaw in her black felt cowboy hat, belting out a rowdy mix of blues, classic and indie rock, and honky tonk; and sometimes the innocent, sweet country girl, softly strumming her tenor guitar in her blue jeans and boots, with her Celtic lilting original songs of heartache and hope- caressing your skin as lightly as a feather with her Americana and alt country phrasing of lyrics bittersweet. This willowy blonde hails from Eastern Oregon originally, but has played and traveled the US from Alaska to the South, from the West coast to the East in her twenty years onstage.
In addition to being a unique, dynamic and authentic artist and performer, she is also a member of the board of directors of the Idaho Songwriters Association, and the founder and director of Idaho’s only female Songwriting organization, Sisters in Songwriting.