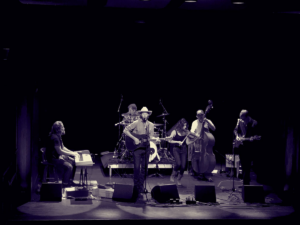 The Band of Drifters will play at Casey’s to close the festival on Saturday September 19th. They play Modern American Roots Music and they encourage you to dance. Based mostly in Montana & Tennessee, the band also includes players from all over the country;  keeping the music varied in arrangement, instrumentation, and regional influences. Their sets draw from country, folk and blues traditions with an emphasis on original songs, done in the old style. Honky-Tonk, Country Folk, Modern American Roots

Their latest release is the full length live album Rialto April 5, 2019 recorded at the Rialto Theater in Bozeman, MT.

Listen to the Band of Drifters